Captain Karen Luknis of Venus Charters cut power to the Suzuki engine as I watched her Pro-Line coast across Key West’s Garrison Bight to a gentle stop at the dock. Meredith Cartwright and Victoria Bassett, down from Toronto for the week, hopped off the boat and helped Captain Karen unload fishing gear and the day’s catch (snapper and yellowtail). 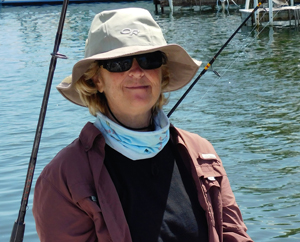 Meredith is a savvy human rights lawyer whose claims to fame so far have been winning pension rights for same-sex couples in Ontario and helping same-sex marriage win across Canada.

The couple, who have been together for more than five years, have booked holidays with Venus Charters several times in the past. Meredith told me that her brother and sister charter with Captain Karen, as well.

“She’s very considerate and smart,” Meredith advised. “She takes great care to make sure we have a fun and safe experience on the water.”

Captain Karen told me her story over a beer at nearby Thai Island, a popular local restaurant overlooking the deep-sea fishing boats lined up along Charter Boat Row — a tale that’s pretty typical of those you hear from locals about how they landed in paradise.

Her early years were spent as a hot mill operator in an Ohio steel mill, a job her dad helped her get (she was only the sixth woman the company had ever hired at that time). In 1988, she came to Key West on holiday and found it so beautiful that she was tempted to quit her job right then and there and relocate. Two years later, she returned for another visit and decided to take the plunge. 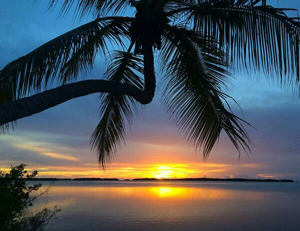 “I didn’t care what I had to do,” she admitted. “I quit my job and packed my things into seven boxes and shipped them down UPS.”

She spent her first seven years on the island driving a cab and grew to love the water through spare-time activities. She and good friend Katey Quinn, who managed the bar at the legendary Atlantic Shores Resort, would pull crab traps and go spearfishing.

In 1997, Captain Karen purchased her first boat and opened Venus Charters. She marketed snorkel trips for women only, selling loads of tickets to visitors staying at what was then known as Pearl’s Rainbow guesthouse.

Eventually, she diversified the business. She switched to private charters; opened the business up to women, men and children; and began offering light-tackle fishing and dolphin-watching adventures in addition to snorkeling.

As a notary public, Captain Karen performed hundreds of commitment ceremonies on her boat before same-sex marriage was legalized nationwide last year. She presided over the marriage of two north Florida women on the water last year — the first two women to receive a same-sex marriage license in the Florida Keys.

She told me that she feels like the luckiest person in the world, with Mother Nature as her boss and a commitment to exceeding the expectations of her clients.

“I get to give people lifelong memories,” she enthused.

Captain Karen shared a couple of stories that made me truly appreciate, in particular, her sensitivity in honoring some of the more extraordinary requests of her clients. The first was about a couple (a man and a woman) she took backcountry fishing with the man dressed in a teeny-weeny bikini.

“Heck, I’m clothing-optional-friendly,” she told me with a laugh. “He knew he could be comfortable with me.”

The second story was the touching chronicle of a woman who had undergone gender reassignment surgery to become a man. The man booked a charter with Captain Karen so that he could feel comfortable sunbathing, swimming and snorkeling in private.

“He still didn’t feel completely at ease taking his shirt off in public, afraid people would stare at the scars and judge him,” she told me. “We were out there for three hours and had a lovely time.”

This was a man in desperate need of someone who would neither ridicule nor condemn him but, instead, allow him to relax and enjoy his holiday as his true self. Captain Karen turned out to be that someone.

“People can be themselves down here,” she told me. “There’s no outward homophobia or discrimination. It’s a supportive, open-minded, liberal community. We become extended family down here. We get to love one another.”